skip to main | skip to sidebar

This Will Make You Proud

Maybe you'd like to hear about a real American, somebody who honored the uniform he wears

Proud graduate of the Rochester Institute of Technology.

And a genuine hero, the secretary of the Navy said so on May 6th 2004.

At 29 Palms in California Brian Chontosh was presented with the Navy Cross, the second highest award for combat bravery the United States can bestow.

That's a big deal. But you won't see it on the network news tonight

And all you'll read in Brian's hometown newspaper is two paragraphs of nothing.

The odd fact about the American media in this war is that it's not covering the American military. The most plugged-in nation in the world is receiving virtually no true information about what its warriors are doing.

Oh, sure, there's a body count. We know how many Americans have fallen. And we see those same casket pictures day in and day out.

And we're almost on a first-name basis with the jerks who abused the Iraqi prisoners. And we know all about improvised explosive devices and how we lost Fallujah and what Arab public-opinion polls say about us and how the world hates us.

We get a non-stop feed of gloom and doom but we don't hear about the heroes.

The incredibly brave GIs who honorably do their duty. The ones our grandparents would have carried on their shoulders down Fifth Avenue.

It was a year ago on the march into Baghdad. Brian Chontosh was a platoon leader rolling up Highway 1 in a humvee.

When all hell broke loose.

And the kid out of Churchville was in charge. It was do or die and it was up to him.

So he moved to the side of his column, looking for a way to lead his men to safety. As he tried to poke a hole through the Iraqi line his humvee came under direct enemy machine gun fire. It was fish in a barrel and the Marines were the fish. And Brian Chontosh gave the order to attack.

He told his driver to floor the humvee directly at the machine gun emplacement that was firing at them. And he had the guy on top with the 50 cal unload on them.

Within moments there were Iraqis slumped across their machine guns and Chontosh was still advancing, ordering his driver now to take the humvee directly into the Iraqi trench that was attacking his Marines.

Over into the battlement the humvee went and outthe door Brian Chontosh bailed, carrying an M16

and 228 years of Marine Corps pride.

And he ran along the trench, with its mortars and riflemen, machine guns and grenadiers. And he killed them all.

He fought with the M16 until it was out of ammo.

Then he picked up another dead man's AK47 and fought with that until it was out of ammo.

At one point he even fired a discarded Iraqi RPG into an enemy cluster, sending attackers flying with its grenade explosion.

When he was done Brian Chontosh had cleared 200 yards of entrenched Iraqis from his platoon's flank. He had killed more than 20 and wounded at least as many more.

But that's probably not how he would tell it. He would probably merely say that his Marines were in trouble, and he got them out of trouble. Ooh-rah, and drive on.

"By his outstanding display of decisive leadership, unlimited courage in the face of heavy enemy fire, and utmost devotion to duty, 1st Lt. Chontosh reflected great credit upon himself and upheld the highest traditions of the Marine Corps and the United States Naval Service."

That's what the citation says.
And that's what nobody will hear.
That's what doesn't seem to be making the evening news.

Accounts of American valor are dismissed by the press as propaganda, yet accounts of American difficulties are heralded as objectivity. It makes you wonder if the role of the media is to inform or to depress - to report or to deride. To tell the truth, or to feed us lies.

But I guess it doesn't matter.We're going to turn out all right as long as men like Brian Chontosh wear our uniform.

"No one remembers who got second."

If that's true, then certainly no one will have even heard about 3rd, and much less 4th. However, for me, inspiration can be found anywhere, even among the "also-rans."

So what did Christian Smith do, after years of training, with one second left? All he did was give it his all. And maybe even some teeth.

Welcome to Beijing, Mr. Smith. And congrats on your third place finish.

"That would make a track geek out of anybody watching," said Alan Webb, the U.S. mile recordholder.

My apologies to the other athletes in this photo -- each have thier own incredible stories.

So many Olympic choices...

... to choose from for inspiration. When 1992 Olympic medalist favorite Derek Redmond pulls a hamstring in his semi-final heat, his dreams and aspirations, years in the making, are finished. Many people would quit, but Derek , in a split second, has a new focus -- just finish. With his Dad racing from the stands to keep officials at bay and give Derek a shoulder to lean on, history is made...

A son asked his father, 'Dad, will you take part in a marathon with me?' The father who, despite having a heart condition, says'Yes.' They went on to complete the marathon together. Father and son went on to join other marathons, the father always saying 'Yes' to his son's request of going through the race together.

One day, the son asked his father, 'Dad, let's join the Ironman together.' To which, his father said, 'Yes.' For those who don't know, Ironman is the toughest triathlon ever. The race encompasses three endurance events of a 2.4 mile (3.86 kilometer) ocean swim, followed by a 112 mile (180.2 kilometer) bike ride, and ending with a 26.2 mile (42.195 kilometer) marathon along the coast of the Big Island.

Father and son went on to complete the race together:


Note: author unknown
Posted by Kenny at 9:34 AM No comments:

Smiles do it every time... 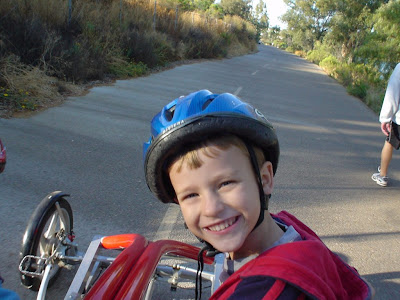 For all I know, I could have been tired, grumpy, stressed, sick, and the kid could have been crying and screaming during the whole bike ride. But this moment in time, captured by a tiny camera thrown into a purse as an afterthought, is how I choose to remember that whole day...